The Silkie chicken is a much loved and adored chicken breed! Silkie chickens are fantastic little chickens with big personalities!! If you get Silkie chickens be prepared to learn and you better learn fast. They follow their own rules and do need a bit of extra care, but are so worth it!

What is a Silkie Chicken?

Silkie chickens are a bantam (smaller) breed of chicken that are known for their fluffy, adorable feathers. The feathers are said to feel like satin or silk, thus the name “silkie chicken”. Silkie chickens have 5 toes on each foot – a normal chicken has 4!- and the outer two toes are usually feathered. They also have black skin, bones and dark meat. They are perfect for kids as they love being held and snuggled more than anything else.

Do silkie chickens lay eggs that you can eat?

Yes, they lay eggs that you can eat. The eggs are smaller than normal chickens and are creamy or pale peach coloured. Silkie chickens lay 3-4 eggs a week generally.

At the time I hatched my Silkie mix chicks at the end of April, two chicks had leg issues. The cause of this can be due to humidity and temperature at incubation. I was using a new incubator and of course no matter how you test it, it’s always different when you get eggs in there for the first time.

I had to fix the splayed legs on two of the chicks as they were unable to walk. One I just taped together with a strip of band aid and he recovered in a couple days. The other one of the chicks could not even stand, and I had to use a small hair tie threaded through a cut piece of drinking straw to keep his legs in the right place. With supportive care of hand-feeding and watering him many times a day within a week he could finally walk and is running around with the others today.

The silkie chicken breed can be prone to vitamin deficiencies while on medicated starter feed and they will most likely need vitamins. I experienced this with my first hatching of silkie chicks. When they were 6 weeks old two chicks appeared to have neurological problems and weak legs. I used Poly-Vi-Sol with no Iron. The medicated feed can block absorption of certain vitamins. I have hatched many other chicks with no issues so this was a first for me and I suspect was breed related. 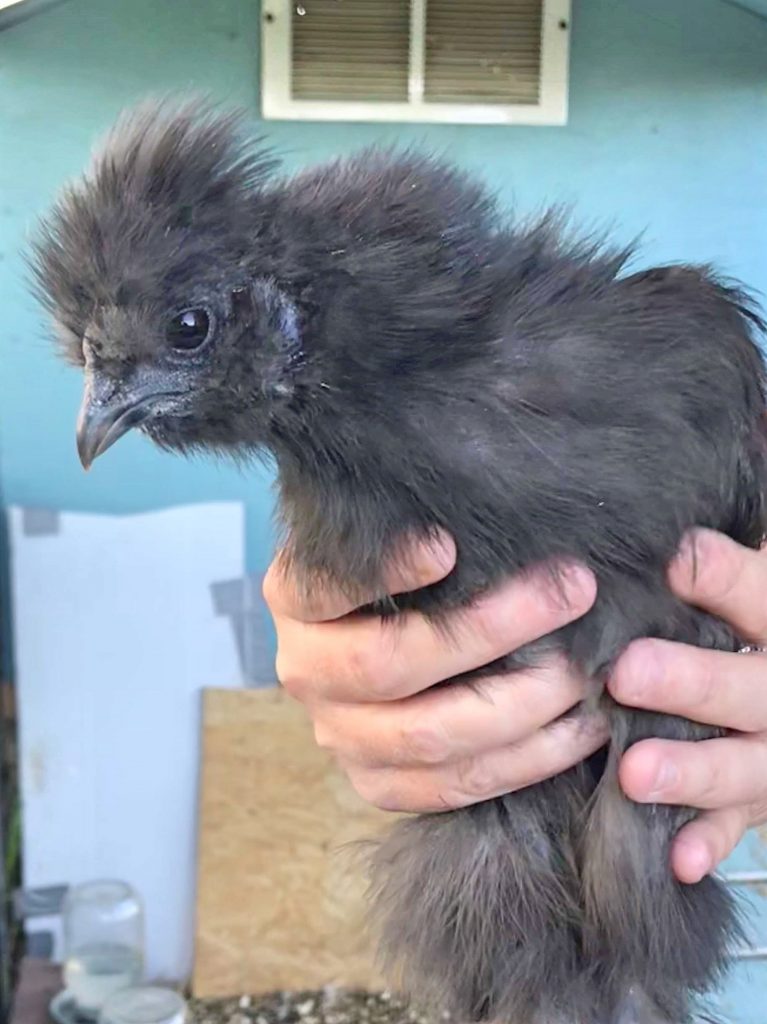 Silkie chickens are known for their soft, fluffy and wispy feathers. This is because their feathers lack barbicels that traditionally link the feathers together to give it the overall smooth look most birds have. So with normal feathers chickens are able to fluff up when they are cold and trap their body heat between their feathers and their body. It’s like their own heat bubble to stay nice and warm. With silkies they are unable to do this. So here in Canada, when the weather is -20 degrees Celsius and colder for weeks at a time I would suggest some sort of additional heat for the night time at least to keep them comfortable.

I have put mine on a temperature controlled outlet in the coop. When the temperature in the coop is colder than -18 Celsius the heat plate gets power. Then it turns off once the coop temperature is warmer than -15. An easy solution that has different temperature ranges that you can buy on amazon and it called a Thermocube . This is the best investment for silkie chickens in a cold climate coop. You can BUY A THERMOCUBE HERE 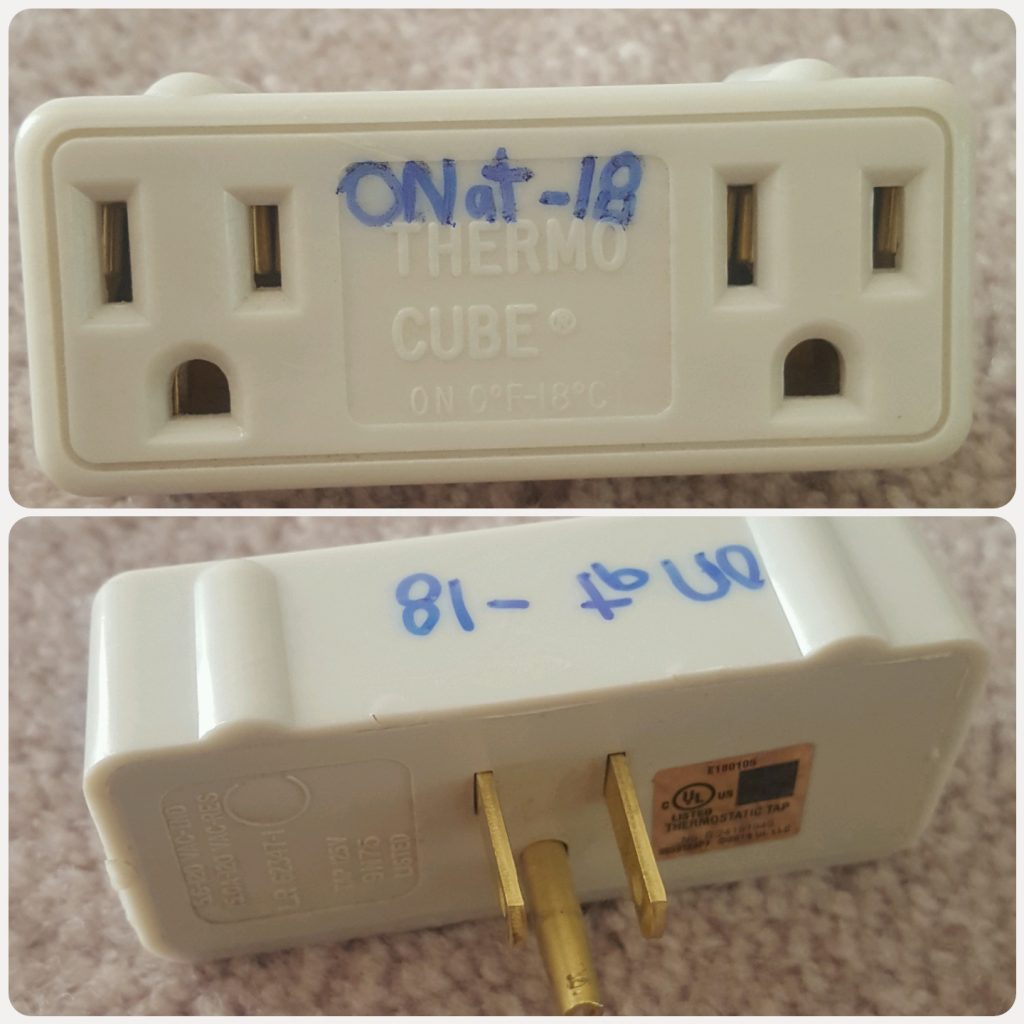 For the wet cold months of the year silkies can sure get messy. But not only messy and wet, but also sick. They don’t always know it’s best to stay inside when it’s cold and raining. Think about how you would feel if you had to wear a soaking wet winter coat outside in spring with the cool wind blowing on you for hours on end? You probably would get a cold or pneumonia pretty quick. It’s like that for silkies because their fluffy feathers do not shed water well like regular birds. When they get wet they are wet down to their skin. My other chickens go out in the rain and their outer feathers get wet and they shake it off. But underneath their outer feathers is their soft down that is still warm and dry. So for a coop and outdoor run for silkies, I highly recommend that their outdoor run is at least partially covered for the cold months of the year. I have covered the top, north and west side of my silkies run to block the majority of blowing rain this cold spring and it has worked very well.

I really believe in watching your animals. You need to pay attention to them when you see them. Spend a few minutes watching how they act, who is getting picked on, who is staying in a corner. Then you also learn what their normal is, and when one of them isn’t acting like their usual self you can act quickly. I have one mottled little Silkie mix and he was the smallest chick of them all. He has such fine fluff all around his eyes and even his cheeks! The poor guy is having a hard time to see to walk most days, never mind find any food before the others gobble it up. So I will have to trim it as he gets older to help him out.

How to Add a Silkie Chicken to Your Flock

If you already have chickens and decide to add some extra little personalities to your flock it would be best to do it on a weekend, or when you can watch them for a few days. Introduce them when they are at least 4 months old, or older of you can. When they are bigger they integrate a bit better as they also can defend themselves a bit better while finding where they fit into the pecking order. I have had the best success to add new flock members after dark. I go in after dark when they are all roosting and settled in for the night and put the new chickens on the other perch or on the floor in the corner.

My silkies like to sit on the floor in a pile at night, so that’s how I will integrate them. I have weekends off and I will put them together on a Friday night so I can watch them Saturday and Sunday. I will check on them every hour at least and also keep them super busy to distract them. Ensure for the first week that everyone goes in at night and finds their own space to roost to sleep. I will hang a head of cabbage, sprinkle hen scratch, and give fresh veggies all throughout the day to keep them distracted and busy. I will keep this up for at least a week to monitor them and the disrupted pecking order.

I ended up hatching a Showgirl chick which is a naked neck Silkie. They do not grow feathers on their necks and this one is the most curious, loudest and friendliest of the group. Males and females are called showgirls and I am hoping for a rooster so we can have more showgirls! If you do a little bit of preparation for silkies they will provide you with endless days of silly antics showing their big personalities. They are so worth it!

This site uses Akismet to reduce spam. Learn how your comment data is processed.

I’m Karami, Welcome to my Blog!

Welcome to The Kitchen Magpie Farm! I head up the care of all the animals out on the family farm. I'm a Mom to 1 boy, Farm Mom to 2 cows & more chickens than I'll ever admit to. I love easy, simple country recipes with a side of homesteading!